March 30, 2016 – Can you imagine Star Wars without any lightsabers? That would be a near-impossibility.

More than a Jedi’s primary weapon, the lightsaber has always had a spiritual and metaphysical connection between its wielder and the Force: 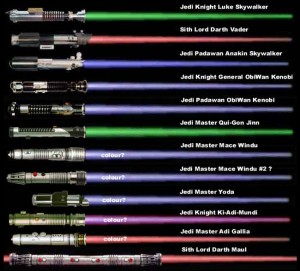 There are at least eleven lightsaber colors, each holding a different meaning. The most familiar colors are BLUE (“to protect users”, as employed by Obi-Wan Kenobi, Anakin Skywalker, Plo-Koon and others); GREEN (“the peace users”, such as Yoda, Luke Skywalker, Qui-Gon Jinn, Ahsoka Tano, and others); RED (symbolizing anger and aggression, red is typically associated with the Sith, including Darth Vader, Darth Maul, Palpatine, Count Dooku and others); and PURPLE (red + blue = purple; users were previously Sith or dabbled with the Dark Side before becoming Jedi users, such as Mace Windu, Mara Jade Skywalker, Jana Solo and others).

Numerous other websites discuss the significance, meanings and origins of the lightsaber colors and the Force-attuned kyber crystals.

If you’re still not convinced as to the central role of lightsabers in the Star Wars universe, watch the following video and see if it doesn’t alter your perception:

The Mandalorian Season 2 premieres in October. NOTE: Disney has not announced an exact date yet. The "Oct 16" date is just a place-holder.October 16th, 2020
63 days to go.