December 8, 2016 – The elusive Blue Snaggletooth, in near-mint condition, is one of the rarest and most difficult vintage Star Wars figures to find.

Sure, you can search for him on Ebay, and you will find a dozen or more in less than ideal condition. They will often have obvious used or played-in condition, including rubbed-off paint, paint scratches, and scuff marks on the silver boots, belt buckle, hands and back of the head. Or they might suffer less-than-tight limbs and a gun that may or may not be an original.

And still, these beloved and abused blue snaggletooths, sold loose, will sell between $200 to $300. For a more minty condition version (almost no paint loss and with tight limbs and an original weapon), expect to pay at least $350 to $400 or more.

Origins of the Blue Snaggletooth

Our favorite blue alien hit the market nearly four decades ago as a production mistake. When Kenner’s toy designers were making the prototype, the only visual resource they had for the character was a grainy, black-and-white photograph of the character’s head. Lacking sufficient details from Lucasfilm, the Kenner designers essentially made a guess as to color (blue) and height (average human height).

When Star Wars (1977) hit the big screen, Kenner’s producers saw to their amusement (or horror) that Snaggletooth was about 3 feet tall and wore a red suit. So the 3.75-inch blue-suited alien was scrapped and quickly replaced with the shorter and stouter red figure, standing just under 3 inches.

Furthermore, unlike his replacement, the taller Blue Snaggletooth was never sold singularly, tucked inside a plastic bubble attached to a cardback. Instead, you either had to purchase him as part of the Sears Cantina Adventure Set or buy the Greedo-Snaggletooth two-pack sold by Sears, beginning in 1978.

Note that back in 1978, the box cover art called one of the four figures “Snaggle Tooth”. Only later, once the set had long disappeared from Sears’ inventories, did common usage change the name to “Blue Snaggletooth”.

Today, a mint-condition boxed Sears playset, sealed and with its original contents (4 figures in baggies, plastic white pegs in a baggy, cardboard backdrop and instructions) can easily sell for $4,000 or more. In 1978, it retailed for $7.88.

So where might you have first glimpsed the Blue Snaggletooth? If you were a kid growing up in the 1970’s or early 1980’s, you would have first spotted him in the pages of a large catalog.

Households across the U.S. received, free in the mail, the Sears Holiday Wish Book. The massive annual catalog with its paper-thin pages was a tradition of American home shopping well before the age of the Internet.

Following the release of Star Wars in May, 1977, you could not find any Star Wars toys listed in the 1977 Wish Book. Every vendor was caught flat-footed by the unexpected success of George Lucas’ space fantasy.

But by Christmas 1978, the Sears Holiday Wish Book would have shown you this:

Notice the 2-pack of Blue Snaggletooth and Greedo that you could buy separately for less than $4.00.

Page 574 of the 1978 Sears Holiday Wish Book was the first-ever offering of Star Wars products in its annual catalog. For $7.88, you could purchase the Sears Cantina Adventure Playset. Sitting on your couch, circling what you wanted in the Wish Book, was the ultimate in wish-fulfillment fantasy.

Once the blue snaggletooth was retired from production, the Sears Wish Book began to update its ads accordingly:

Blue Snaggletooth (still pictured in the playset) would eventually be replaced by his red counterpart. Note the new 2-pack (red) Snaggletooth and Greedo as the blue version is phased out.

This is the white mail-away box you would have received if you had ordered the 2-pack Greedo and Snaggletooth (blue or red):

By 1979, the “corrected” red version of Snaggletooth was released, both in the Sears Cantina Adventure Set and as a carded figure. Blue Snaggletooth was thus consigned to a special place in Star Wars history. 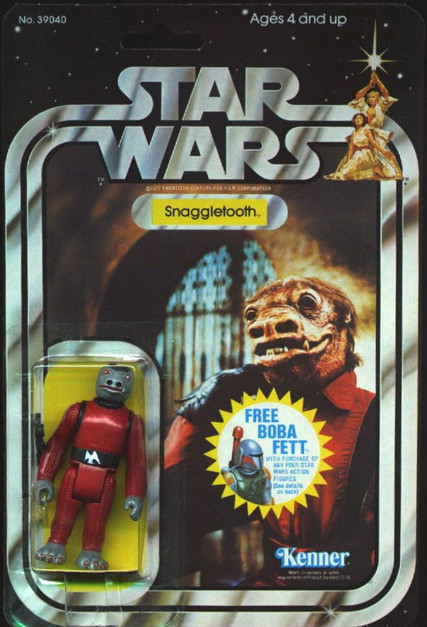 The very common Snaggletooth (red version) first appeared as a replacement in the Sears playset as well as on the 20/21 cardback. When sold loose and complete, he can easily be acquired for under $20.00.

Snaggletooth actually had a proper name: Zutton. Over the decades, however, so much confusion arose as Zutton became confused with Zutmore and sometimes even Takeel. So a brief introduction is in order:

Zutton (also known as Snaggletooth), a male Snivvian, is the name of the character seen in the cantina scene of Star Wars.

Zutmore is a female Snivvian who we first saw in the widely-criticized 1978 Star Wars Holiday Special.

Kenner confused the two when it put a picture of Zutmore (the female) on packaging for the Zutton/Snaggletooth (the male) action figure [Source: starwars.wikia.com]

To add further confusion, Hasbro released a “Zutton” figure in 2001. But the figure actually resembles “Zutmore” the female.

Then there’s Takeel, the brother of Zutton. Both Takeel and Zutton appear in Star Wars (1977), and they each have their own action figures. 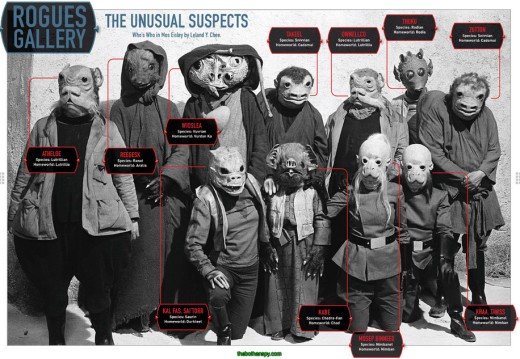 So into this confusion, Kenner waded once again. In its attempt to replace Blue Snaggletooth with a “corrected” red version, Kenner relied upon images from the 1978 Star Wars Holiday Special. And so here is a still-shot from the cantina scene of the TV special, from which the red snaggletooth was patterned: 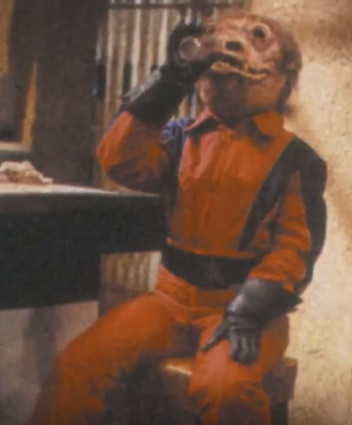 To replace Blue Snaggletooth, Kenner created new molds for the arms (now with furry hands) and legs (much shorter and now with furry feet). But notice that in the Holiday Special photo above, Zutmore is wearing gloves (and boots, not visible in the photo). Even the original character, Zutton (in the black-and-white photo above, 2nd row, far right) is wearing boots.

So why did Kenner give us bare feet? Confusing, isn’t it?

In addition to the blue and red snaggletooths, you could purchase the Takeel figure (Zutton’s brother) as part of the Cantina Aliens set in Hasbro’s POTF2 (Power of the Force 2) series in 1998. Takeel can be acquired loose for under $10.00.

Takeel is the creature at the far left.

So to clarify: Zutton (Snaggletooth) is the red-suited alien who first appeared in Star Wars (1977). Zutmore appeared on TV in the Star Wars Holiday Special (1978). Zutton’s brother, Takeel, also appeared in the first Star Wars movie. If you are still confused, don’t worry. Legions of fans and Kenner/Hasbro have confused the characters as well.

Toe Dent Versus No Toe Dent

One more thing collectors will note: In addition to red versus blue versions, there is still another variant. Blue Snaggletooth can be found as either a “Dented Toe” or “Non-Dented Toe” variant. The indentation in one boot is most likely a manufacturing error.

Toe Dent versus No Dent: The existence of a slight dent further drives up the price as some collectors will now seek out TWO blue snaggletooths for their collections.

Just in time for the Holidays, a truly rare Blue Snaggletooth in original baggie, has hit Ebay. The original starting bid was a low $200, but as of the posting date of this article, the current bid is now $750.00.

And here is part of the seller’s description:

So what is driving the price of the bagged plastic alien to atmospheric heights? Several factors are at work:

● Mint Condition: The multiple photos on Ebay are good, if not perfect, evidence that this Blue Snaggletooth suffers no paint defects or signs of wear.

● Sealed in Baggie: Because this version of snaggletooth was never attached to a cardback when first sold, the “sealed in baggie” condition makes it nearly MIB. (Arguably, true mint-in-box condition would have this figure sealed in the original Sears Cantina Adventure Playset. But this is close enough.)

In addition, there is a subset of hardcore collectors who search for figures still sealed in their original baggies. Many of these collectors presumably will never remove the figure from the baggies either, or they would risk a large devaluation. Others will have no qualms about opening the baggie in order to display a mint-condition action figure.

● Completeness: The problem with many vintage Star Wars figures are the weapons. Since the late 1990’s, the market has been flooded with increasingly well-produced reproductions or custom-made weapons. Even an honest seller may mistakenly believe he is selling an original weapon when, in fact, it may be a repro.

The fact that the blue snaggletooth and his weapon, currently up for bid, are still sealed boosts buyer confidence that the gun is authentic.

● Provenance: Provenance is defined as “a record of ownership of a work of art or an antique, used as a guide to authenticity or quality.” If the seller’s Ebay description is to be believed, then this unbroken-chain-of-ownership provides good provenance:

“I found him in a small box labeled (Greedo/Snaggle tooth) in the Sears Cantina Adventure Playset (which I will be auctioning)…I am the child of the original owner.”

On the other hand, the Ebay seller is new and has only 18 feedback ratings. So caveat emptor.

● Rarity: When was the last time you saw a sealed-in-baggie Blue Snaggletooth? Maybe never?

To view the Ebay listing, click HERE. Once the bid closes on December 12th, we will post an update on the final sale price. With 4 days left to go, Blue Snaggletooth may well hit the $1,000 mark.

Not bad for a blue alien who never appeared in any of the Star Wars movies.

7 thoughts on “In Search of the Blue Snaggletooth”

The Book of Boba Fett (NB: Date below is an estimated placeholder)December 10, 2021
7 months to go.